Posted on October 29, 2017 by kristasherbarium 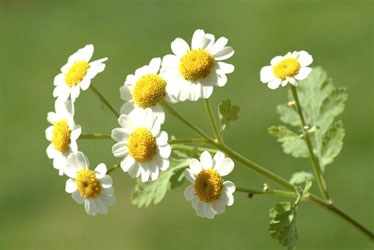 Feverfew is often cultivated in gardens for ornamental purposes. It is easy to grow and propagates well from cuttings. I have found it when walking on paths by meadows and along the forest edge. It has a strong, bitter odor and bees steer clear of it.

Feverfew is a perennial and grows to a height of about 2-3 feet. In summer feverfew bears clusters of numerous white flowers with yellow centers that resemble daisy flowers.

The fresh leaves and flowers are harvested and used fresh, ideally, to make tinctures or dried and stored for making teas.

Feverfew is harvested in the herb’s second year of growth in mid-summer or whenever the flowers are in full bloom. Cutting down the herb by about 3-4 inches will also allow feverfew to regrow for a secondary harvest.

Wearing gloves is recommended as there may be contact dermatitis or skin sensitivity to the Asteraceae/Compositae family.

According to The Herbarium:

“Throughout history, feverfew has been primarily an ally of women and an aid to conditions specific to congestion in the head. It has also been a notable balancer of the respiratory and nervous systems, a pain reliever, and useful in warding off insects. Recent scientific studies are cropping up for some of these traditional uses as well as for other indications found in historical records such as arthritis and asthma. At the  same time, cancer has become a strong focal point of feverfew research.

Feverfew’s ancient reputation as a woman’s herb was etymologically linked since ancient Greece, where it was known as τό παρθένιον (parthenion) and in Latin as parthenium. Both names have been directly transplanted as the modern Latin botanical name, parthenium.

“Venus has commended this herb to succour her Sisters, to be a general strengthener of their Wombs, and to remedy such Infirmities as a careless Midwife has there caused…and doth a Woman all the Good she can desire of an Herb” (p. 131)

Feverfew was considered an herb specific not just to women, but to mothers (Parkinson, 1640). Indeed, as with a handful of other herbs viewed as especial protectors of women, feverfew has carried the common name of “motherwort.” The idea that feverfew is an herb of women is true of Eastern traditions as well; in TCM (Traditional Chinese Medicine), feverfew—viewed as a uterine spasmolytic in Western traditions—is a uterine qi-regulator.

Although the herb was not introduced to North America until the middle of the 19th century, it is interesting to observe that the Cherokee tribe kept feverfew in their Medicines of the East and the North for issues pertaining to young women’s menstrual cycles (Garrett, 2003). Associated uses in the European tradition include vaginal steams with infusions of the herb (Parkinson, 1640). Feverfew has also been used traditionally for infertility. By the early 19th century it was being indicated for “hysteric” disorders (Hill, 1812).

Today, however, it is feverfew’s affinity for the head that is most well known and widely promoted; scientific research on the herb’s prowess in conquering migraines began relatively early and on a large scale. In the 1970s, newspapers in England were reporting the story of a Welsh woman who was nibbling three fresh feverfew leaves each day and thus rid her self of migraine headaches over a timeframe of several months (Mabey, 1988; Bone & Mills, 2013). Highly successful clinical studies followed, along with popularity in the UK.

As a heat-clearing relaxant, feverfew is also analgesic and anti-inflammatory (Holmes, 2006), which is in part why it has been used for headaches, neuralgia, and fibromyalgia. With respect to its reputation in migraine therapy, it appears that feverfew inhibits granule secretion from platelets and is highly and uniquely anti-inflammatory due partially to the presence of the above-mentioned constituent parthenolide (Bone & Mills, 2013). That being said, feverfew possesses at least 30 other sesquiterpene lactones (Pareek et al., 2011).

With respect to the nervous system, feverfew has been used traditionally for a variety of indications on a spectrum including tinnitus, vertigo, nausea, and vomiting, all of which may have connections to the nerves (Arikan-Ayyildiz et al., 2017). In France feverfew can be found popularly applied to insomnia and herbalist Matthew Wood has mentioned it in relation to panic attacks (Wood, 2008).

Amelioration of low mood is also a recurrent feature of feverfew’s historical profile; Hildegard von Bingen remarked that it drew out bad humors when eaten often, creating good ones instead (von Bingen, 2001), while herbal authors of the Renaissance like Parkinson and Gerard tell us that it was used for melancholy and sadness, as well as for those who are “pensive, and without speech” (Gerard, 1636, p. 653). These indications were generally echoed again in the early 20th century (Grieve, 1971). A very recent scientific study (mice-only) has confirmed these traditional anxiolytic and anti-depressant-like effects of feverfew and positively suggested the herb’s therapeutic potential (Cárdenas et al., 2017).

Feverfew’s analgesic action has also been traditionally used for various types of pain relief, for example, from toothache (Pareek et al., 2001). Grieve suggests an infusion of the flowers left until cold and then taken to dull sensitivity to pain in a nervous disposition (Grieve, 1971). The analgesic properties of feverfew have been recently studied with respect to extracts from the flowers alone and it was concluded that a flower extract is capable of offering a powerful anodyne for various types of pain: inflammatory, articular, neuropathic, and acute (Di-Cesare Mannelli et al., 2015).

Feverfew, which is also a vermifuge as well as antiparasitic, has been traditionally used as an insect repellent. Such an indication may be linked to the presence of pyrethrin in feverfew, a chemical compound that is a naturally-occurring insecticide. This traditional Western use apparently carried over with the herb’s introduction to North America; a tribal elder reminded Cherokee herbalist J. T. Garrett that feverfew was earlier used to ward off insects:

“…[it] was used as a ‘bugbane’ to repel insects. The leaf would be placed in bean bread dough as a way to take it without upsetting the intestines” (Garrett, 2003, p. 72).

Given the popular focus of the last half-century, it is easy to pigeonhole feverfew as “the migraine herb.” Despite an otherwise quieter presence in contemporary practice, the spectrum of feverfew’s many applications—showcased by its multi-faceted history, in which it was once a primary ally for women’s reproductive wellbeing, a key balancer of the nervous and digestive systems, a reliever of pain and the discomfort of infections, an aid for respiratory difficulty, and a useful repellent—leaves the door open to new discoveries.

In addition, we’ll doubtless be hearing more about feverfew as its old folk indications for inflammatory conditions such as arthritis and asthma are resurrected in current science and as more of its role in cancer treatments continues to be revealed.”

With respect to migraines in particular, dosage will vary not only with quality of the herb, which can be considerable, but also with severity/frequency of migraine episodes.

Feverfew should be avoided during pregnancy or if on blood thinning medications, as it can affect the rate of blood clotting. Avoid using Feverfew herb if you are allergic to plants from the Asteraceae (Compositae) family such as daisies, chrysanthemum, marigolds or artichokes.

← Arnica
Acupuncture: But, I hate needles! →

Lactation is an issue that has recently come up in my herbal practice and I was prepared to help this mum with delicate, yet effective herbs.
Parfém je výživou podněcující mé myšlení.
Spring Cleaning for your body?
The last time I was home was six weeks ago.
Krista's Herbs Facial Serum
Hledala jsem čisticí přípravky na obličej bez mýdla, které by byly přírodní, dobře čistící a zvlhčující, a které by nebyly v plastovém obalu. Nebo ještě lépe, kdyby nebyly zabalené vůbec.